Thank you friends and clients for a wonderful 2018!

My California clients should be aware of a few laws that might impact their business in 2019. For an overview of these laws, please read the linked article published in

Several clients have inquired about cannabis infused cocktails. In July, the California ABC issued a revised industry advisory that clarifies their position…

I also found this article in Forbes interesting…

9 Beer And Spirit Predictions For 2019

Take care and be safe,

If your ABC license permits minors in your business, or if your business is a place where minors try to sneak inside, this post may be the most important one you ever read here.

Sounds dramatic? Sure. But, it’s also true. Let me prove it to you…

Perhaps the first evidence I offer you should be about how serving a minor might result in financial ruin. But I don’t think so. People I know, including my clients, value self-respect more than financial success. They make doing the right thing a core principle of their life.

Some might say not selling alcohol to minor is the socially responsible thing to do. And while that’s true, my experience suggests it much more personal than that.

In the last years of owning and operating the Shark Club, University of California Irvine fraternities bussed hundreds of students to the club for a special college promotional event. The night was a huge success, and it seemed all went smoothly.

The next morning my manager, Heather, called me crying. She‘d taken a morning call and heard that one of the students, Ralph Nunez, left the club, walked half a mile to a freeway ramp, ran across the freeway, jumped the middle divider, and was hit by a vehicle. He died from his injuries.

Immediately, the ABC visited the club and investigated. Ralph could neither be seen entering the 21-and-older entrance nor seen on any video.

New stories quickly came out that Ralph was consuming jungle juice (a concoction of several liquors/liqueurs) on the bus.

The timing of when the bus arrived and how long it took customers to get in (massive lines from busses arriving at same time), and knowing when the tragedy occurred, made it unlikely Ralph got in. Yet, his friends said he did, for a short time. They also said he didn’t get alcohol inside the club.

After my club was initially named in a lawsuit, lawyers for Ralph’s family discovered the many safeguards we had in place to prevent a minor from getting alcohol, or even being in the vicinity of alcohol. As a result, we were removed as defendants from the complaint.

I had to go to the California Highway Patrol office to obtain the medical report for the insurance company. I regret reading the report. The information included the injuries Ralph suffered and the toxicology report. His alcohol blood alcohol content was extremely high and he had multiple drugs in his system.

The Shark Club staff couldn’t remember seeing Ralph that night. Still, I will always wonder if any of our outstanding staff members saw him walk away in a noticeably impaired manner and didn’t engage Ralph.

If I knew our business served alcohol to Ralph, or ignored his impairment, my life would be diminished. As it is, I frequently think about him.

The reason California has a dram shop law that holds licensees civilly liable for serving obviously intoxicated minors is the same reason the ABC runs the Minor Decoy program year-round: the California legislature and State government have long recognized that minors are at a significantly higher risk of harm when exposed to alcohol.

A few statistics demonstrate the higher risk of harm for minors:

Let me be very clear about that last statistic: a minor with BAC at or above .15% is 15,560 times more likely to die in a fatal vehicle accident than a sober person.

Minors simply do not have the same life experience, driving expertise, and judgment as an adult. In addition, the still-developing brain of minors results in thrill seeking, riskier behavior and significantly more alcohol-involved tragedies.

As mentioned above, California’s dram shop law allows for civil liability if you sell alcohol to an obviously intoxicated minor and that minor injures or kills somebody else.

Please click on either, or both, of these links, before continuing to read:

The first link chronicles a $40 million jury award against a Riverside TGI Friday’s. The jury found the restaurant owner was 55 percent responsible for the death of a customer. In a nutshell, the bartender served a minor, and over served that minor, who then stabbed and killed another customer.

The second link described a recent lawsuit against a Salinas restaurant for serving a minor who then died in a car crash.

Both cases expose the financial vulnerability of California alcohol businesses if a minor is served alcohol, and injuries follow. If injuries occur, assume the ABC will find out…

When a minor is served alcohol, becomes intoxicated, and injuries themself or another person, law enforcement will connect it back to your business through the Target Responsibility for Alcohol-Connected Emergencies (TRACE) program. In this program, law enforcement investigates the source of alcohol in any incident (crash, alcohol poisoning, etc.) involving a minor and alcohol. The goal is to hold the source–whether it be a store, bar, or an individual–legally responsible for the harm.

The Salinas lawsuit referenced above occurred after a TRACE investigation:

The most well-funded ABC enforcement action, by far, is the Minor Decoy program. While typically run by ABC agents, it is also run by local police (usually the result of receiving an ABC GAP grant), and jointly by the police and ABC agents.

If your business gets in trouble with the ABC, it’s very likely the result of a Minor Decoy sting operation.

While your first violation typically results in a suspended license or payment of a fine, it’s the cumulative impact of multiple violations that is most concerning. And after one violation your business will have caught the attention of the ABC, so you should expect more undercover operations, increasing your risk of a second violation. Three violations for selling to a minor in three years and your license is revoked.

Here’s a link to ABC press release on the revocation of a Canoga Park restaurant for receiving three violations for serving to a minor:

Next post we’ll discuss how to protect your business against serving alcohol to a minor. 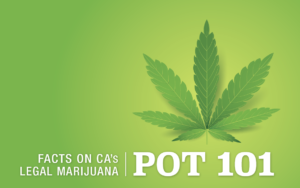 The two-page bulletin does an excellent job of addressing commonly asked questions concerning the recent law change and its impact on ABC Licensees.

I found it to be helpful. Hopefully, you will to. Here is a link to the ABC bulletin on cannabis:

During trainings, I often get asked ABC-oriented questions. If you have such a question, below is another link. This link will take you to ABC form 608 (ten-pages), and a quick summary of selected ABC laws:

If after reading ABC form 608 you still have questions, feel free to email me and I’ll try to help, as in, contact my business partner Lauren Tyson, who is a former ABC District Administrator.

In my last blog (My mom told me not to waste my food. She said nothing about liquor.) I stated:

“If there was ever an industry plagued by waste, it’s the bar industry. My experience suggests most bar owners unnecessarily lose between 30-42% of their liquor profits. “

Let’s explore where that range comes from, beginning with the lower limit of 30%.

The Kerr Study in 2008 evaluated pouring practices in 80 bars in 10 different counties in California. The study only examined 1-liquor pours, not multi-liquor cocktails (Mai Tai, Long Islands, LA Water, Adios, and on and on).

The Kerr Study revealed bartenders over-poured 1-liquor drinks by an average of 42%. Meaning, instead of pouring 1.50 ounces, they poured 2.13 ounces.

How does that affect your bottom line?  If all your cocktails were over-poured by 42%, then only 70% (1.50/2.13) of the liquor you purchased was really needed for the sales created. So a 42% over-pour means 30% of the liquor purchased (that’s profit) is simply given away free.

But the problem is much worse.

Bar Optimizer secret shoppers evaluate bartender pouring practices for all cocktails. How do the secret shoppers know if a cocktail is over-poured? In other words, who decides how much liquor should be poured in an Adios, or any other cocktail? The owner. To date, our clients want their bartenders to pour popular cocktails in accordance with recipes taught in bartending schools.

That’s not what typically happens.

Bar Optimizer secret shoppers also find an average 1-liquor over-pour in Orange County of 55% (granted, many of our clients are so because they know things are out of control).

The 63% average over-pour in Orange County means 39% of the liquor purchased is given away free.

I began by stating: “bar owners unnecessarily lose between 30-42% of their liquor profits.”

We’ll talk about that 3% next time, and more important, how the 30-42% is loss profit is only part of the story. There’s also the lost opportunity cost….oh my.

Before Jon Taffer there was Phil Crosby.

In the 80’s and 90’s Phil traveled the world, showing business leaders how to make more profit. Including those in the service industry.

His book Quality is Free triggered a revolution.

Phil the guru demonstrated a business’ profitability was not just about how many customers it had, but also, how little waste it had. A business with many customers could fail with too much waste. Vice versa, efficient companies could survive with only a moderate customer base. Eliminating waste is key to profitability.

If there was ever an industry plagued by waste, it’s the bar industry. My experience suggests most bar owners unnecessarily lose between 30-42% of their liquor profits.

Heck, I should have known better. I was schooled in the teachings of Quality is Free while working as a Technologist at 3M––my life before opening the Shark Club (Costa Mesa) in 1990, then Metropolis (Irvine) in 1992. My bad.

Why did I have so much waste? The same reason it happens almost everywhere: just too busy dealing with daily issues to step back and to do analysis on a part of the business I felt insufficiently knowledgeable.

Only after the business became inconsistent did I look harder at the bar numbers. I was shocked. The statistical skill-set I gained at 3M enabled me to quantify the level of my waste. It was sickening. What did I do about it? I went fishing. Specifically, brown trout fishing in the Sierras. Rejuvenated, I came back, and week-by-week, took back control of my bar. And increased liquor profits.

In 2011, I retired from the bar business and opened a consulting business. Only then, after working with dozens of bar owners, did I come to understand the extent to which wasteful practices are entrenched in our industry.

Over time I’ll discuss the generic wasteful practices commonly found in our industry, including research studies on waste inside bars. Most important, we’ll explore how to eliminate the waste and make more profit.